I had the privilege of presenting with two former colleagues, @MrsCaracci and @MrsServe at the Illinois Reading Council Conference last week. We shared all of the resources that we created and curated when bringing our own version of StoryCorps to their 6th grade ELA classrooms. One of the highlights of the presentation was an interactive portion where we asked participants to use Google Voice to share a story from their middle school experience. You can find some of their “phone-casts” here. Check out our presentation and resources below!

Looking to provide more choice in how students demonstrate their understanding?  Check out these Multiple Intelligence choice boards that provide you and your students with creative ways to show what they know!  These choice boards were developed for K-8 teachers and were a part of a professional development on creativity.  If you open the slides, you’ll find that grade levels for each board (or really, wheel!) are mentioned in the presenter notes section.

Digital citizenship.  It’s a multi-faceted concept that we model as educators and embed into lessons to help our students understand how to navigate, analyze, interact with, and create with digital technologies.  But, what does digital citizenship mean to a middle schooler? How do our young students process and connect with such a big concept?

Using the guiding questions above, I tried to think of a new way to help students see some of the key components of digital citizenship.  It’s one thing to understand the umbrella concept, but why are these components important and how do they interact to help us become good digital citizens?

Things to change for the next go-round:

Because of the nature of my job, I will be doing this lesson with a few other classrooms so I’ll be sure to update the post with new takeaways.  Here’s to Makey making digital citizenship come alive in a new way for students!

Remix, Repurpose, and Redesign: Promoting Student Ownership and Engagement:  My colleagues and I presented on strategies for remixing content and repurposing technologies, which allows educators to redesign their pedagogical strategies.  Through low-tech and high-tech repurposing, students can engage in deep play, allowing them to get lost in the content…in a good way!  These strategies include redesigns of every day classroom routines, like Bell Ringers, classroom rules, Exit Slips, etc.   Click the image below to be taken to session resources.

iPadeology: Staff and Student Resources for iPad Deployment:  My colleague and I presented on the key characteristics of the mindset that we developed to guide decision making during our first year in our district’s 1:1 pilot.  We share the steps we believe made us successful, how we managed to keep the focus on instruction and not the device, student development resources, staff development resources, and parental resources for deployment.  Click the image below to be taken to session resources. 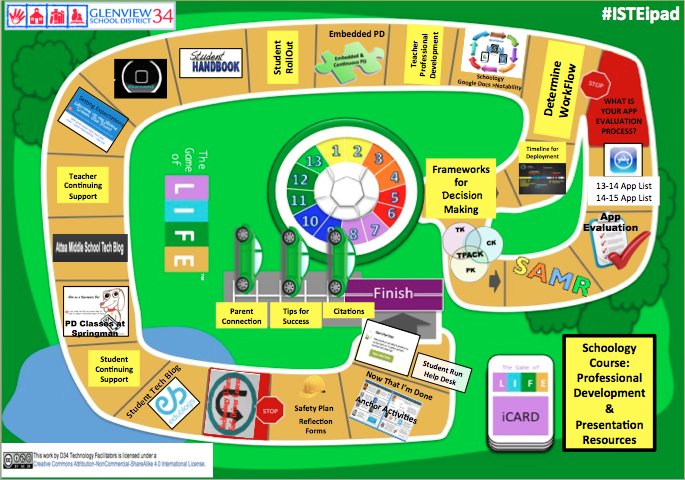 With my time in Michigan State’s Educational Technology program, the “Maker Movement” has really captured my attention.  Two  years ago, I went to my first Maker Faire in Detroit, Michigan.  Since then, I’ve been to three different Maker Faires.  This idea of creating, repurposing, and innovating blows my mind when I see examples of the way Makers view common items.  Makers seem to have the perspective of life as an ever-evolving masterpiece or they see the potential to turn standard items into a contraption that measures the wavelengths in the electromagnetic spectrum (just an example, but a true story!).  As the Maker Movement is getting more attention in the educational field, this Maker spirit was re-energized within me at a recent #PLAYDATE Chicago.  Using MSU and PLAYDATE as resources, I purchased the following resources to utilize with students.

To test out what a middle school student could accomplish within a certain time period, I rolled out these resources with the Tech Club after school.  I wanted to see how to gauge a timeline for pushing into a classroom and doing an activity with any of these resources, so this was a great way to collect some data!  The students had about 45 minutes to work and I introduced it by telling them that they were the pilot members and that our goal was to think of ways we could relate this to any subject area…this is always my challenge to them!  They’ve “think tanked” awesome educational repurposes for technology in the past, so they are now owning the responsibility of figuring out educational applications of tools that don’t necessarily seem educational.  Here’s where we started:

Students were eager to get started! The directions that I gave them were to use the resources they have at hand (written directions that came with product and the Internet).  I told them that I’d only help if they got into an extreme bind.

Here are the results after 45 minutes!

Here are the interesting connections that students were making to content (some more obvious than others):

…More to come after we have our next go round after Spring Break!

This work by Candace Robertson (Marcotte) is licensed under a Creative Commons Attribution-NonCommercial-ShareAlike 4.0 International License.

See What I’m Tweeting About!